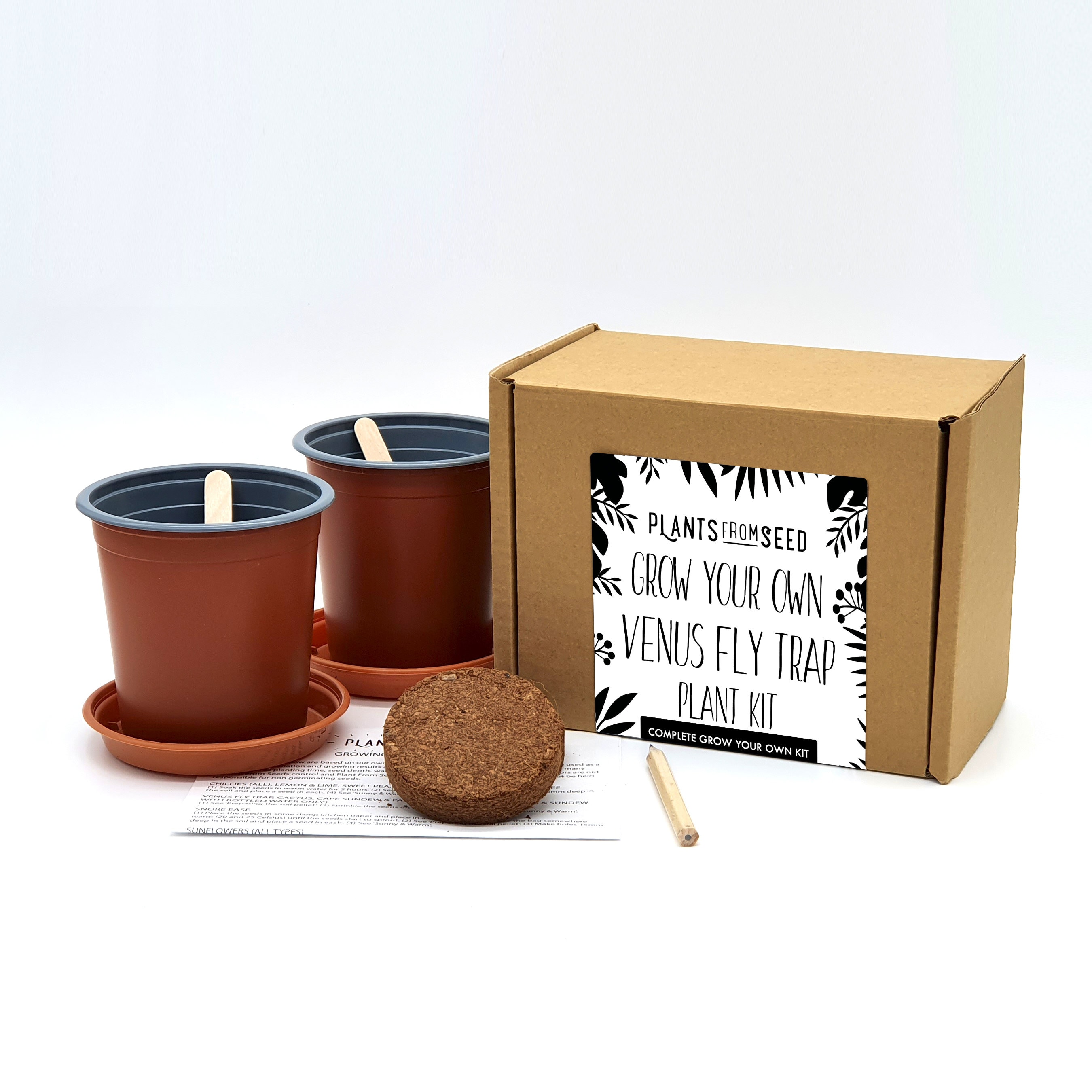 The Venus Fly Trap, Dionaea Muscipula, is a carnivorous plant native to the bogs and swamplands of North and South Carolina. It preys on insects with its uniquely shaped leaves. The leaf has two primary regions: a broad flat typical leaf-like region called the leaf-base that is capable of carrying out photosynthesis and grows out of the ground, and the trapping mechanism, called the leaf-blade or lamina, at the end of the leaf that is composed of two lobes with hinged together by a midrib. Each trap usually has between two and five "trigger" hairs on each lobe with three trigger hairs on each lobe being normal. The edge of the trap is lined with teeth or finger-like cilia that lace together when the trap shuts.

Full payment is required before any items can be shipped. All payments are to be made via ETSY.

We can ship to Australia but customs can open and remove certain parts of the product. Buyers having items shipped to Australia buy at their own risk. We can not guarantee seeds will not be removed.

Delivery: As standard we do not offer tracking on any item. The cost of tracking would triple the postage rate and make the shipping more expensive than the item purchased in most cases. We ship via Royal Mail 1st Class Airmail and once the item has left us, it's in the hands of the postal services.

Whilst most items arrive on time we have had item take up to 30 days for the US and CANADA. Therefore we must allow 30 days before a refund can be made or a new product sent. For UK order this is 20 days and for EU orders 25 days.

Opened By Customs: Although over 99% of our orders reach the buyer intact, we have had a very small number of items opened by customs and seeds removed. When this happens we will resend seeds in a plain envelope with 48 hrs of being notified. When contacting us please provide a copy of any customs form or report.

Items Returned By Postal Services: If items are returned via a postal service due to not being collected, incorrect address provided by the buyer then the item can be resent but the buyer must pay the second postage charge. Items returned due to an inaccurate address type by ourselves will be resent free of charge.

Refunds: You can return your item to us unopened and we will on receipt of the item offer you a refund. The box must be able to be resold. If the outer box is damaged we will deduct the replacement box from your refund. Any reports of items not being received must be reported with 30 days of the dispatch date for a replacement or the option of a refund.

The germination and growing results are the purchasers responsibility and depend on many factors such as planting time, seed depth, watering, light and weather conditions. These factors are out of Plant From Seeds control and Plant From Seed or any company selling this product can not be held responsible for non germinating seeds.

Sending replacement seeds: We will on request review any report of seeds not germinating and in certain situations offer to send more seeds. The cost of the P&P is to be covered by the buyer. Costs are 0.99 GBP for the UK, 1.49 GBP for EU and 1.89 GBP for the everywhere else.

0 items in your cart